Syed Saddiq and ahmad Faedzal at the Team mas partnership agreement between iSN and UFL. Some of the malaysian athletes taking a welfie with Syed Saddiq at the signing ceremony. — Photos: moHd SaHar miSNi/The Star

UNIVERSAL Fitness and Leisure (UFL) Sdn Bhd and the National Sports Institute (ISN) have launched a new line of sports attire and equipment under the identity of a new national sports brand.

Dubbed Team Mas, the unveiling saw several early concepts shown off at the launch event at the Youth and Sports Ministry in Putrajaya.

“This idea, I gather, was the brainchild of our savvy Youth and Sports Minister Syed Saddiq Syed Abdul Rahman and is what the industry has been looking forward to, where the ministry has taken the initiative towards the uplifting of the commercial aspect of Malaysian sports.

“I believe Team Mas will become a revenue driver for ISN and eventually be able to contribute back to athletes, associations and other causes under the ministry, ” Radha said.

Syed Saddiq said the reason Team Mas was set up was to ultimately ensure that the ministry and sports industry can come together and work towards a win-win scenario.

“We want to ensure that the sports industry grows to the extent that is not just seen as an industry that caters to athletes but creates quality jobs and ensures athletes’ welfare is taken care of as well as ensuring our sports ecosystem continues to get better.

“In many developed countries, the sports industry is a GDP contributor but in Malaysia, that discussion is still relatively new and there is a lot more we can do, ” he said.

He added that much more planning for collaboration and partnerships was needed with many corporate partners under the Team Mas banner.

The bold designs of the early concepts were shown off by members of the national dodgeball team, who will don the apparel when defending their world title at the World Dodgeball Federation 2019 World Championships in Cancun, Mexico, from Nov 26 to Dec 1.

Radha said the Team Mas attire would boast superior quality with FBT and both brands set to make waves on a national scale soon.

“Today marks a new chapter in UFL history as this partnership with ISN will see Team Mas become synonymous with Malaysian sportsmanship and create a new identity for athletes and spectators, ” he said.

“For the past 34 years, UFL has been involved with sports through equipment distribution, sports development, athlete and association as well as international event sponsorships.

“UFL has also demonstrated that sports is truly a part of our DNA over the past three decades.

“We have also provided gainful employment to many sportsmen and women after retirement from various sports like bodybuilding, track and field, squash, football, hockey, lawn bowls, rowing, archery and more, ” added Radha.

The new Team Mas apparel and equipment are set to be available early next year in most sporting goods retail outlets and department stores.

The line will be produced by Thailand’s biggest sporting goods manufacturer, FBT, the same

company that was behind the 2017 KL SEA Games apparel and merchandise exclusively distributed by UFL. 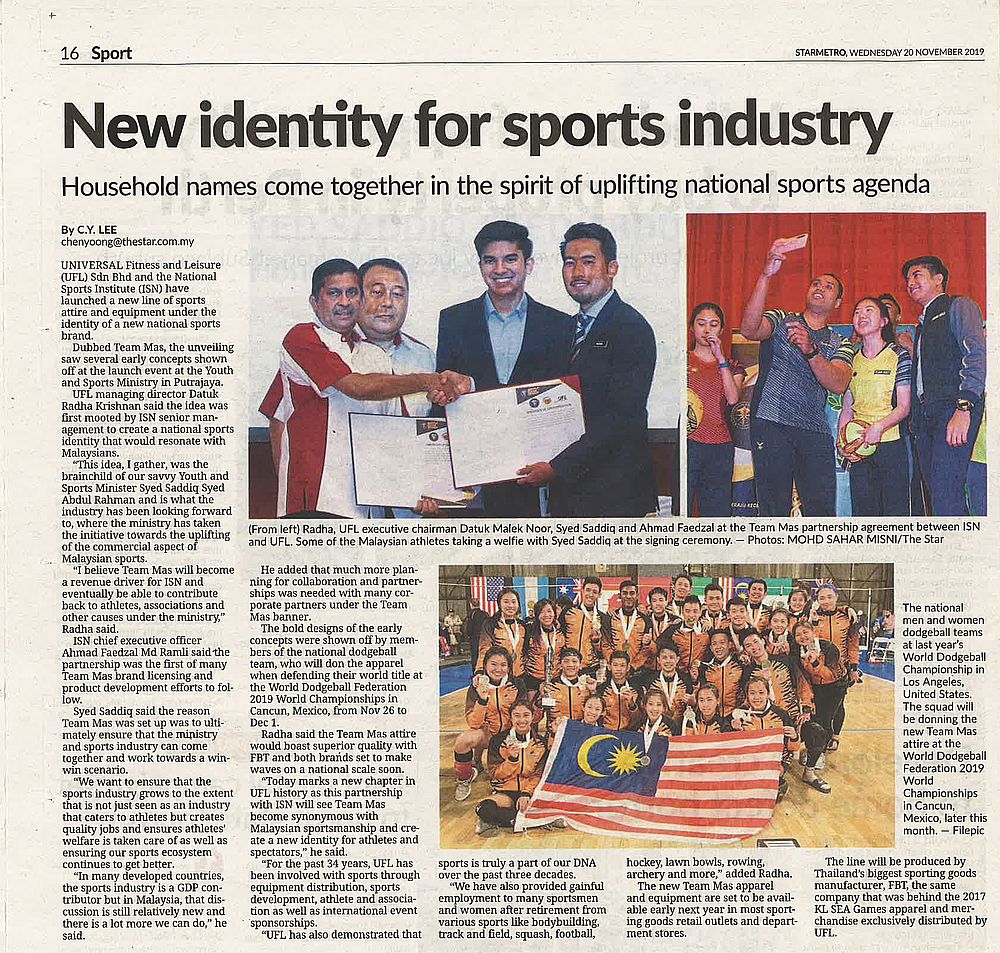 One thought on “New identity for sports industry”